“With all the trouble and grief that comes with the coronavirus, this is an incredibly interesting time for mobility researchers.” For Erik Verhoef, professor of spatial economics, it is almost certain: massive working from home will have a structural impact on traffic flows if the economy recovers at some point. “In the previous crisis, there was less traffic because we started working less. Now there is no traffic, but people are still working remotely”, says the professor. “There were already all kinds of techniques for working remotely. Now they have also been used by people who are less inclined to change. Everyone uses Zoom or another video programme and notices that many meetings work fine in that way. And it saves travel time.”

This experience is also present at consultancy and engineering firm Tauw. This company with 1,200 employees immediately switched to working from home following the initial corona measures. “Within two days, 90% of the work was done from home,” says director Henrike Branderhorst. “It works smoothly.” “We see that things are possible that were considered impossible four months ago,” adds director Ralph van Roessel (Tauw has a duel leadership model). “We must maintain the flexibility that now appears to be possible in organisations and work processes after the corona crisis. If we don’t do that as a society, that’s a missed opportunity.”

Last Monday, the Knowledge Institute for Mobility Policy (KiM) of the Ministry of Infrastructure and Water Management published an initial study. This shows that 44% of the respondents started working at home more often. Of that group, 61% say that it is easy for them and a quarter say that they also want to work at home more often after the corona crisis. 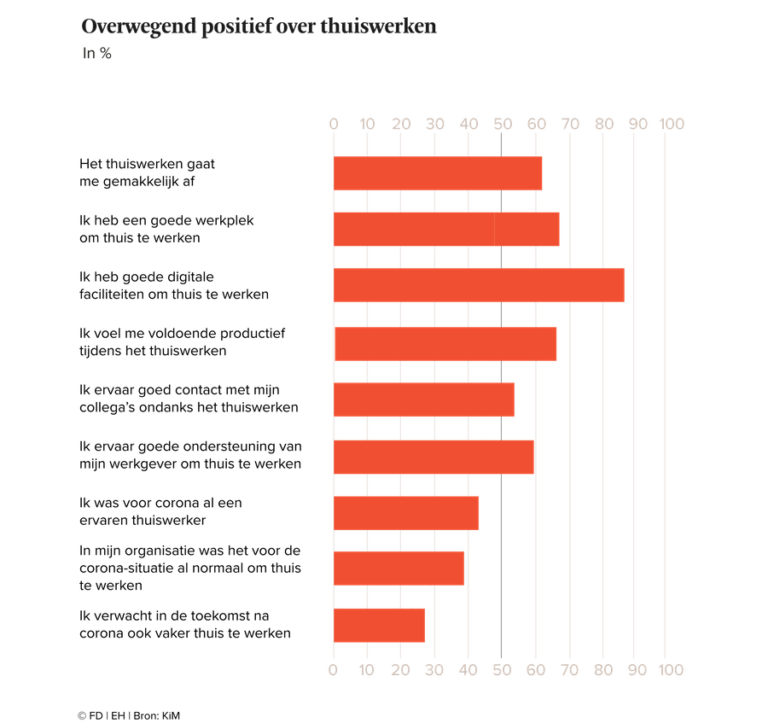 Note: that is under less than ideal conditions. Due to the closure of schools, parents are at home with the children and care and teaching is required. Not really a situation where the full focus is on work. Still, it pleased an important part of the home workers. “Until March, the whole country was stuck in rush hour. Now we are learning that this should not be an inevitable fact in a boom period,” says Branderhorst. Tauw specialises in consultancy work for the environment, soil, water and the physical environment and thinks there are lessons to be learned. “What does that mean for the spatial plans that will originate for 2030 and 2050? Are they sustainable enough? Can we move towards a world that is more flexible, has fewer traffic jams, has cleaner air and offers more space for relaxation?”

In the Netherlands, a relatively large number of people already worked from home before corona. Last year, 39% of workers did so, according to figures from the Central Bureau of Statistics. The majority of the 3.5 million home workers mainly did this occasionally and often not on a fixed day. Compared with other European countries, the Netherlands is at the forefront, according to a study by Eurostat from 2018. The incidental crisis will give that occasional a more structural character, expects Dirk Brounen, professor of real estate economics at Tilburg University. “People have now been able to taste it. I haven’t heard anyone who wants to be stuck in traffic for another five days.”

“Predominantly, offices will be fitted out differently’

Petran van Heel, sector banker at ABN Amro, also thinks that working from home will take root. He estimates that 30% to 40% of office work will be done from home. “The longer this takes, the more people will get used to it and the better the technology will become.” Even companies that have not been particularly interested will come around, he expects. “Everyone has now been forced to experience it. As a result, they will soon be unintentionally through the learning curve and will know exactly which parts will yield efficiency,” says Van Heel. This can have consequences not only for the traffic on the road, but also for the office market. If people start working at home more, a company may be able to manage with less space. This will not play out for the time being, due to the one and a half meter rule. Companies then need all the square meters they have. But in the long term, real estate owners will notice this. “The problems are not as acute as with shops. But the effects of corona will also gradually become visible in offices. Office space is a cost item. Companies will now take a critical look at this and this will play a role in revisions to lease contracts and will therefore affect the value of real estate”, says Van Heel. Leon van Leersum of Redept, which assists corporate tenants, has already heard from one company that is thinking about having its employees work at home three days a week when the corona crisis is over. “Then you can cut your office in half,” says Van Leersum. Real estate advisor CBRE doubts whether it will lead to fewer square meters. The office expert does think that working from home will be given a structural place in companies, but thinks that this will mainly result in the function of offices becoming different. “People mainly come to the office to meet, so there will be more meeting rooms and cafes and fewer desks. But it remains to be seen whether this will lead to fewer square meters at the end of the day, “says Wouter Oosting, workplace strategist at CBRE. 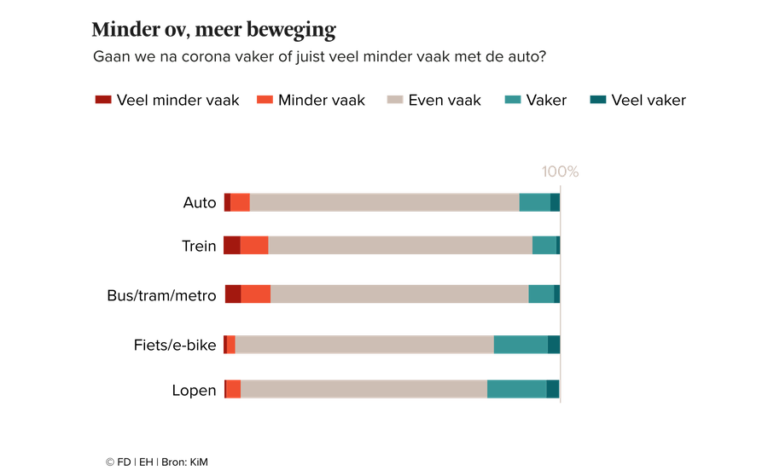 On the motorway it will probably take a while before the effect of working from home more often becomes really noticeable. The recession will come first. Working from home will mainly count when the capacity limits are reached, because a little more or less traffic will lead to considerably longer or shorter traffic jams. Last year, for example, traffic on the main road network increased by 1.4% and the amount of lost vehicle hours rose directly by 3.2%. Verhoef: “It is most helpful if some of the people work from home on Monday, Tuesday or Thursday. Those are the busiest days.” According to him, that does not even have to be a whole day. For example, someone can do the morning meeting at home and go to work after rush hour. Or the employee goes home in the afternoon and does something in the evening. “It cuts both ways. The employee saves time and the traffic pressure is reduced for others.” It also relieves the Randstad of another problem. Barring some major bottlenecks, there is not much scope for widening on the main road network. Think of the A12 between Utrecht and Amsterdam. There are ten lanes and already the underlying road network cannot cope with rush hour. The cities are also not waiting for more cars. They just want to become car-free. According to Verhoef, it is therefore important to continue to invest in public transport, even if the trains are now empty. “The public transport is being avoided for fear of contamination, but previous experience suggests that travellers will return when the pandemic is finally over. And in a metropolitan region there is no more efficient means of transport in terms of capacity than a train or light rail connection. ‘

This article (in Dutch) appeared in the Financieele Dagblad on 24 April 2020.